U16 team won the GSL title on Sunday November 14th

U16 team won the GSL title on Sunday November 14th

The Manchester Flames U16 team won the GSL title on Sunday November 14th in a thrilling 2-1 OT victory over the previously undefeated Granite State Wild at Conway's Ham Arena.  This is the second year in a row a Flames U16 team will represent New Hampshire at the USA Hockey Tier II National Tournament.

The U16 Flames, led by Head Coach Jeremy Baker, had quite the season with a combined record of 27-6-3 while playing in the GSL and EHF Platinum.  Backstopped by the duo of Evan Johnston and Evan Duclos (combined 2.50 GAA), the strong roster produced nearly six goals per game this year.  Swiss-army knives Billy Smethurst and Nate Freelove provided an example of the type of roster Baker built with their willingness to move from offense to defense and back all year.  This group was willing to do whatever it took to win.

The Flames compiled a 13-2-1 record during the GSL regular season which had them as the #2 seed heading into the playoffs.

Game one had the Flames open the scoring on a goal by Brian Riccio (assisted by Owen Webber and Zach Baker) in the second period.  That was followed by two more in the final period, an unassisted goal from Connor McInnis and one from Harry Dermody (assisted by Brodie O'Neil).  The 3-0 shutout victory over the NH Avalanche was to be a sign of things to come for the gritty club.

The Flames second game was against the NH Edge and featured physical play with a combined 10 penalties between the teams. Manchester put up two in the first on shots by Connor McInnis and Joey Velez, one in the second by AJ Dow, and two more in the third by Harry Dermody and Will Brauer to notch the 5-1 victory.  Dawson Fancher, Owen Webber, and Brodie O'Neil assisted on the goals putting their team in a good position for the final day of the weekend.

The semi-final game against the New England Wolves was another physical affair with plenty of special team opportunities for both squads.  After a two-goal lead in the first, off the sticks of Joey Velez and Brian Riccio (assisted by Sam Maurice), a penalty in the second period provided an opportunity for the Wolves to get on the board.  Devin Hurton continued his strong defensive play, the penalty expired, and then Joey Velez closed the door on the Wolves season.  Goals on successive shifts in the second by Velez not only netted him the hat-trick but propelled the Flames into the finals.  The 4-0 victory was the second shutout of the playoffs for Liam Duclos.

Manchester headed into the finals knowing they would have to do something they hadn't yet done this season - beat the Granite State Wild.  Their two previous affairs ended up in a 6-5 loss and a 2-2 tie and the boys were determined to have a different outcome to close out their season.

The finals started off the way the semi-final game ended.  Joey Velez continued with the hot hand and got the Flames on the board in the first period on an assist from AJ Dow.  Manchester overcame multiple shorthanded situations in the tightly contested game before the Wild tied it up early in the third period.  Evan Johnston held down the fort the rest of the way making several key saves and setting up the overtime dramatics.  Two and a half minutes into the extra frame Harry Dermody scored the overtime winner and the U16 boys were National Bound.  Michigan in March - there's no place they would rather be! 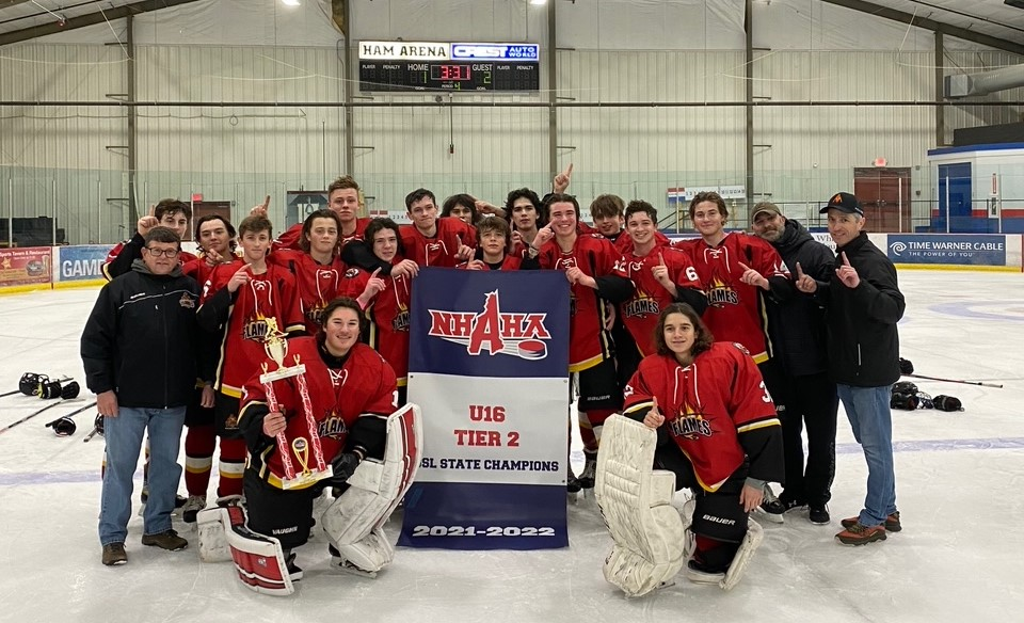